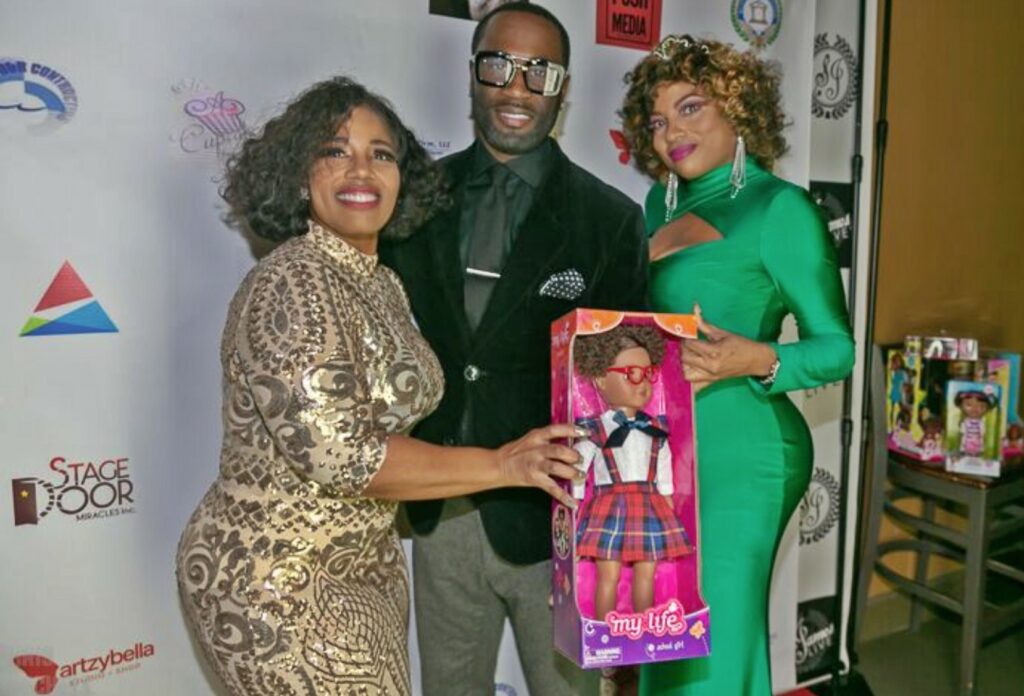 This year, more than 500 dolls were collected for underserved children at Bring Out the Dolls. Hosted by Councilwoman Carmalitha Gumbs and AIME, LLC Founder Tracy Rolle, the annual event rallies the South Fulton community around the “reason for the season.” The dolls will be distributed through a partnership with Help a Child America.
“Knowing that you have made a child’s Christmas a little brighter is one of the best gifts you can receive,” said Gumbs. “We are grateful to all of our partners and donors who make this annual event a success. The generosity and compassion shown by our community members are what make South Fulton a wonderful place to live.”
Residents of South Fulton and neighboring municipalities joined Gumbs and Rolle at St. James Live! on December 12 for the “party with a purpose.” The event included a live band, photo booth, doll making station and complimentary dessert bar. Artsy Bella, a South Fulton artist, completed a live painting of a doll that was raffled during the event.
Mayor William “Bill” Edwards, Councilwoman Catherine Foster Rowell, Councilwoman Naeema Gilyard, Councilman khalid kamau and Mayor Pro Tem Mark Baker all attended the event in support of their colleague.
Special guest Q Parker of the famed R&B group 112 surprised guests with a performance of his chart-topping hit, “Cupid.” Sponsors included Georgia Power, Waste Industries and The Collaborative Firm, LLC, among others.
According to Rolle, Bring Out the Dolls originated in Orlando, Fla. The initiative was launched to encourage Vanessa VanDyke, a 12-year old who got national attention when she was bullied because of her natural hairstyle. Events escalated when school administrators tried to force her to change her hair and Van Dyke faced expulsion. An attorney took the case and VanDyke was later vindicated. Bring Out the Dolls is a reminder to VanDyke and others to embrace and celebrate who they are.
Rolle had been asked to bring the event to the Atlanta area, and Gumbs joined forces with her to bring it to fruition in 2017.
“In two weeks, we planned our first event,” said Rolle. “It was such a great showing and such a great response. It’s an opportunity for residents to come out and dress up and have a good time. And all we ask is that you bring out a doll.”
Photo Credit: Chris Mitchell / Bring Out the Dolls
For more South Fulton news and updates, follow us on Twitter (CoSF Observer) and Facebook at www.facebook.com/cosfobserver.