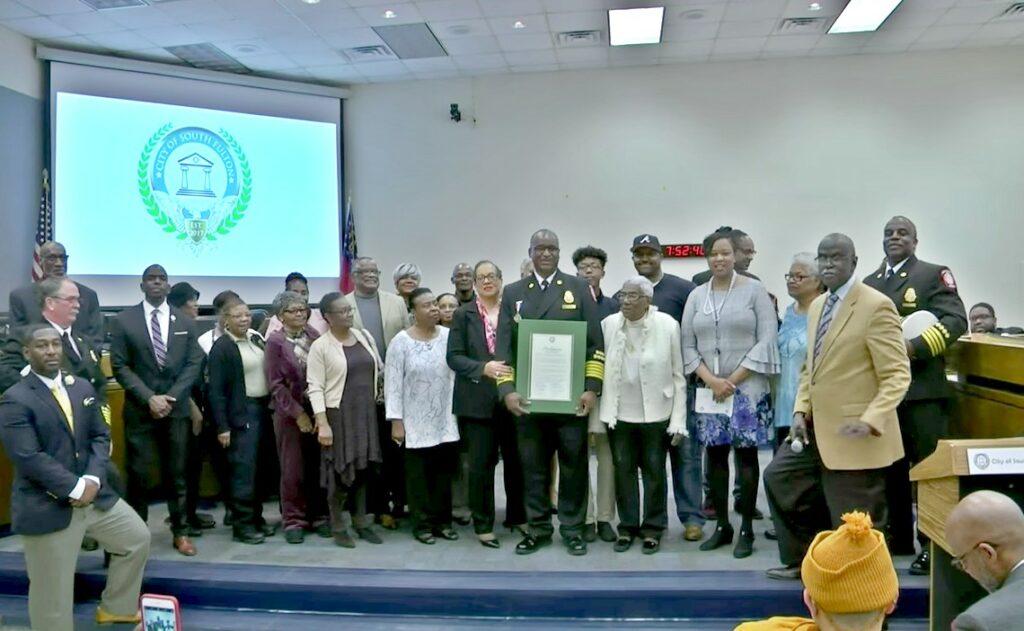 Fire Chief Larry Few is retiring after 38 years of service. He was honored with a proclamation at the City of South Fulton’s regular meeting on February 26.
Chief Few joined the South Fulton Fire Rescue Department in 2018 after serving with Fulton County since 2006.
“I am a blessed man to have the opportunity to serve as the Fire Chief for the City of South Fulton,” he said, addressing all in attendance as his friends.
In his remarks, he announced that the city will soon take delivery of two new fire engines and a ladder truck and that he will be submitting documentation to lower the ISO rating. He also shared that the EMS response time has dropped from 30 to 11 minutes, an achievement that resulted as part of his ongoing advocacy and efforts.
During the presentation of the proclamation, Mayor William “Bill” Edwards called Chief Few an outstanding chief and an inspiration. He also intimated that one of the new fire trucks might bear Few’s name. Councilmembers praised Chief Few for his character and leadership, calling him a man of his word.
Chief Few is a man of many accomplishments. During his tenure with Fulton County, he secured millions in federal grant funding to secure additional staff and equipment. He has served on the executive board of the Metropolitan Association of Fire Chiefs and was the body’s president from 2014 to 2015. He has also served on several committees in the Southeastern Association of Fire Chiefs.
Active in the local community, Chief Few is currently the Chair of the Trustee Board and President of the United Methodist Men of the East Point First Mallalieu United Methodist Church. He has been married to his wife, Mazie for 42 years, and is the proud father of two sons, one of whom serves as a firefighter in the metro area.
For more South Fulton news and updates, follow us on Twitter (CoSF Observer) and Facebook at www.facebook.com/cosfobserver.