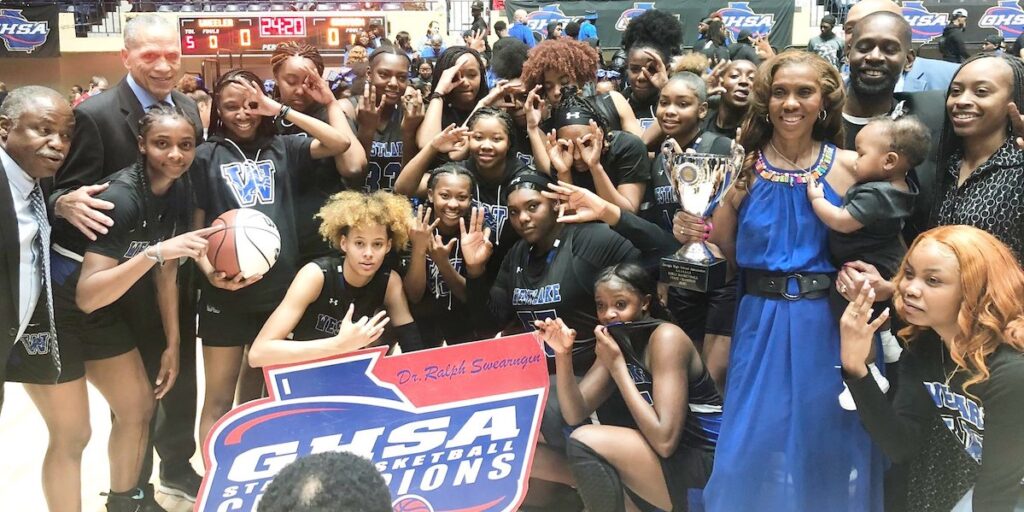 The Westlake Lady Lions delivered the Collins Hill Eagles their first loss of the year at tonight’s GHSA Basketball State Championships in Macon. Relentless at both ends of the court, the Lions ran away with a 72 to 53-point victory to defend their state 7A title for the third year in a row.

The talented high schoolers were dominant the entire game bringing a professional-level performance to Middle Georgia, and stamping their place in state history. Their victory marked a 15-game winning streak this season and a 90-game winning streak against Georgia players over the last three years.

Johnson, a junior, had 23 points, six rebounds, four assists and one steal. She has been an impact player since middle school and may give Cam Newton a run for his money as the school’s most popular player.

Latson, a sophomore, also put up 23 points plus three rebounds, three assists and two steals. She’s brought Houston Rocket Russell Westbrook’s “rock the baby” taunt to the high school court, and is one of the most well-schooled players in the state.

Brianna Turnage continues to be rock solid for the Lions. She had eight points, five rebounds and three assists. The 6-foot 2-inch junior also came through with three blocks.

Collectively, the Lady Lions delivered a fiery performance marked by consistent shooting, gorgeous passes, patience when it mattered and a lot of heart. The team wore shirts with the slogan, “the only way is through,” and despite a great showing from Collins Hill, Westlake proved to be the strongest competitor when they came out on the other side.

Even at a 15-point lead in the fourth quarter, Coach Hilda Hankerson never let up on her players. The animated coach has led her club to the status of one of the greatest not just in the state, but in the entire country. And during the championship her team helped demonstrate why she’s one of the most winningest coaches in the game.

Next year, due to a classification change, Westlake’s Lady Lions will move to 6A. According to Westlake’s Director of Athletics Carl Green, the team has accepted an invitation to play in this year’s Geico Nationals in April in New York City.