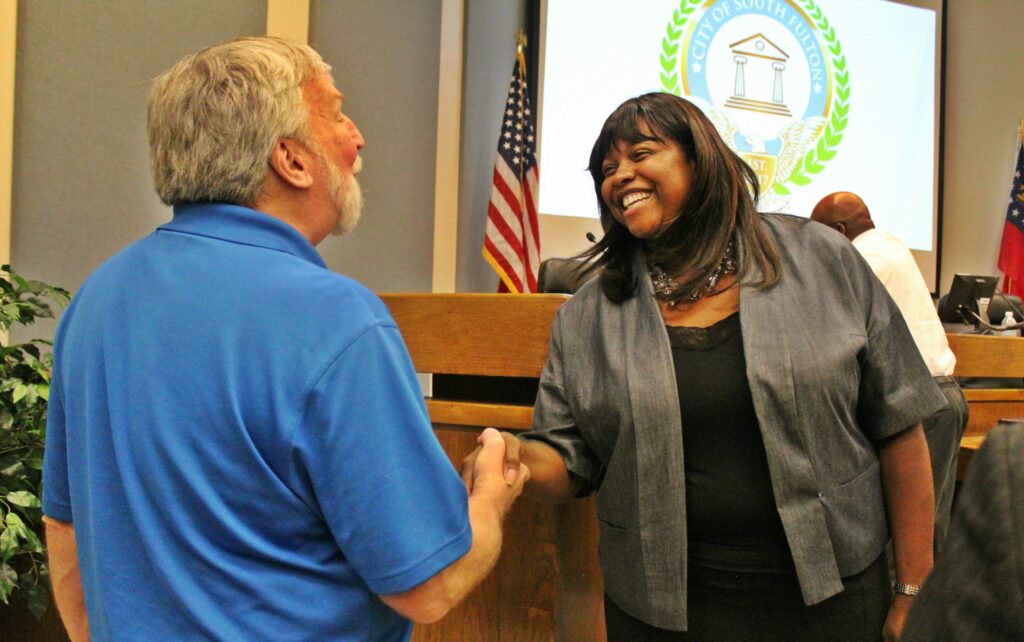 Last June, the Atlanta Voice first shared the story of South Fulton’s municipal court, the first to be run exclusively by African-American women. The story and accompanying photo became a viral sensation and now a reality television series is in the making.
Good Caper Content, the true crime programming division of ITV America, has inked an exclusive development deal with Chief Judge Tiffany Carter Sellers, solicitor LaDawn Jones and public defender Viveca Famber Powell.
The series, tentatively titled “Women in Black,” will be executive produced by Kathryn Vaughan, Good Caper Content’s president. It will follow court cases and provide a glimpse into the women’s lives.
“Being the first court run by all women, and the first court run by all African-Americans, gives us the unique opportunity to build a system that restores our community’s belief in criminal justice,” said Sellers, Jones and Powell in a joint statement. “We are thrilled to partner with Kathryn and Good Caper and feel this powerful story is in the best of hands.”
Vaughan is a television industry veteran who started her career working on feel-good shows like “Extreme Makeover: Home Edition.” She later transitioned to true crime and investigative programming. She is the creator of “Cold Justice,” which is now in its fifth season and currently airing on Oxygen.
Vaughan went before South Fulton’s mayor and council on November 13 to talk about “Women in Black” and screen a pitch reel. In addition to sharing her vision for the show, she pitched the exposure it could bring for the city, potential jobs and positive economic impact.
Following Vaughan’s presentation, South Fulton councilmembers offered both praise and concerns.
“That is amazing, I am very excited about it,” said Councilman khalid. “I think it’s a testament to what we can do when we own who we are as a city.”
He also expressed his hope that students from the Fulton County Schools College and Career Academy who study film and animation would be considered for employment opportunities.
Councilwoman Helen Willis said that she wanted to make sure that the production company’s goal was not to portray South Fulton as just another crime-ridden African-American city. Judge Sellers countered citing Vaughan’s past work, and her respectful treatment of the people and towns featured in her previous projects.
“The women of South Fulton are redefining what the criminal justice system can do for its citizens – at times, employing unconventional approaches and tactics in order to best serve their community,” said Vaughan in a recent statement. “Their story is quite remarkable, and we look forward to sharing their lives and day-to-day courtroom experiences, as well as capturing the birth and establishment of a young American city.”
Click here to view the pitch reel for “Women in Black.” The segment starts at 1:24:58.
Photo: Judge Sellers greets citizens at a city council meeting following the announcement of her appointment by Mayor William “Bill” Edwards.
For more South Fulton news and updates, follow us on Twitter (CoSF Observer) and Facebook at www.facebook.com/cosfobserver.