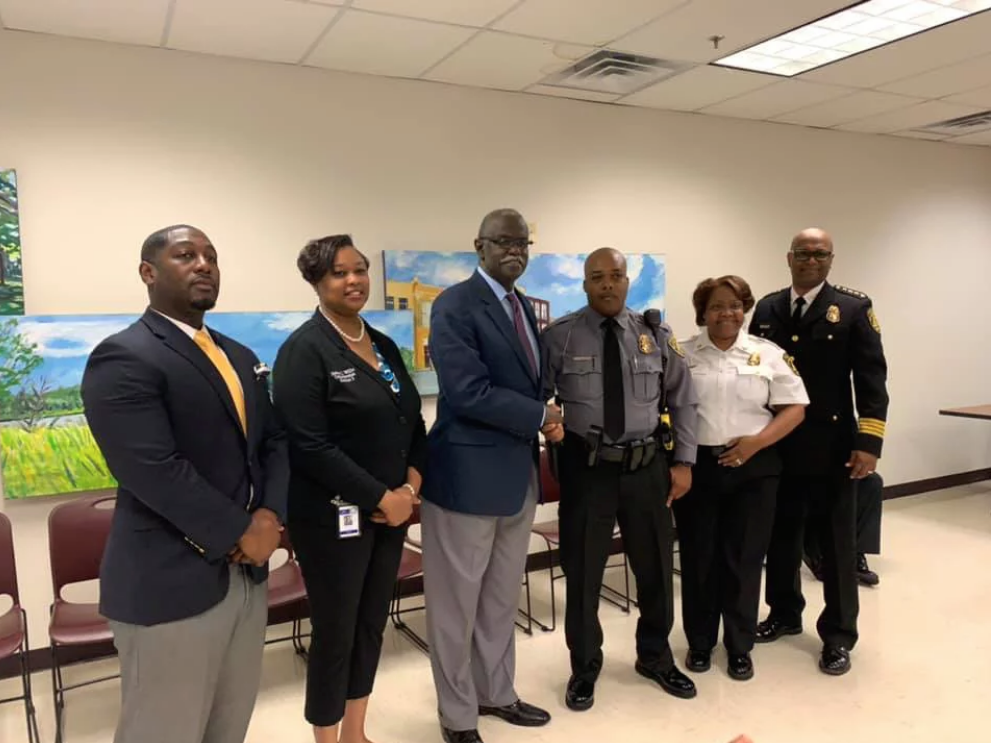 Just over a year after its launch, the South Fulton Police Department is celebrating key milestones and significant growth in the size of its force.

When the police department transitioned in late March of 2018 from Fulton County to the City of South Fulton, it was comprised of just 85 sworn officers. To date, the police force has grown by more than 50 percent.

As of March 25, according to Police Chief Meadows, the department was down to its last 16 vacancies with 15 candidates scheduled to go before the hiring board. Aggressive recruiting methods have helped the department to increase its gang unit, narcotics unit and court service section.

An intelligence unit has been created to analyze crime trends under the COMPSTAT methodology. And Chief Meadows has expressed that he will ask the mayor and council for more resources in the FY20 budget.

Officers are also being recognized under the Gold Dome for their efforts in the community. Capt. Cotton-Tukes was named Police Officer of the Year in a ceremony hosted by State Senator Donzella James.

While there’s a lot to be celebrated, the City of South Fulton still has a ways to go to shake the negative narrative around its crime statistics. Issues of theft plague Walmart shopping centers in the city and auto theft and theft from vehicle incidents continue to drive crime numbers up dramatically. Gang activity is also a serious concern.

Strategies proposed to help make the city safer include a revision of the police department’s beats, which have not been updated since the 1970s, even with the area’s significant growth in population. The city council recently approved funds for Georgia Tech Research Corporation to conduct a beat redesign and feasibility study. The City of Atlanta recently underwent the same process in an effort to reduce police officer response times, balance workloads across geographic areas and deliver a higher quality of service.

Chief Meadows is also working on an app that will leverage citizen input to gather information about suspicious activities. Citizens will be able to upload crime tips and video, as well as see information on E-911 calls, receive code red alerts,  view a police calendar of events and more.

“I was siting down talking with a group of citizens on services that [they] would like to see come into the police department and believe it or not [the app] was one thing that was really at the top of the list,” said Chief Meadows at a recent townhall meeting.

In addition to his efforts at the municipal level, Chief Meadows is lending his insights to bring about a shift in the region. He’s been named to a panel that has been tasked with presenting much-needed changes in the justice system to Governor Brian Kemp. He hopes the panel’s efforts will help to bring about sweeping changes, particularly in the areas of juvenile crime and how the court handles repeat offenders.