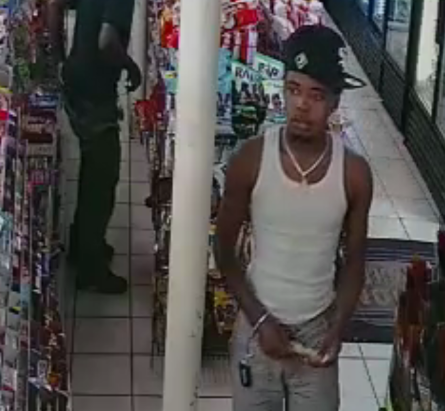 Police are seeking help in identifying the suspect in the shooting near Citgo at 3280 Stonewall Tell Road. The incident occurred on July 2 at approximately 3:45 p.m.

According to authorities, two Dodge Chargers were seen at the gas station. The subject pictured was the driver of a 2018 or 2019 black Dodge Charger RT with a sunroof and handicap license plate. The passenger was seen on surveillance video with his hands down the front of his pants as if he had a weapon, taunting the other vehicle in the parking lot.

Shortly after both vehicles exited, approximately five gunshots were fired from the suspect’s vehicle, striking the other car. The four-year old, who was seated in the backseat, sustained superficial injuries to his face and arm from the shattered glass. He was transported to a local hospital for treatment.

Anyone who has information regarding the identity of the suspect should contact Detective Guin at 470-809-7355. Information on this case or this suspect can also be submitted anonymously to the Crime Stoppers Atlanta tip line at 404-577-TIPS (8477) or online at www.StopCrimeATL.com.