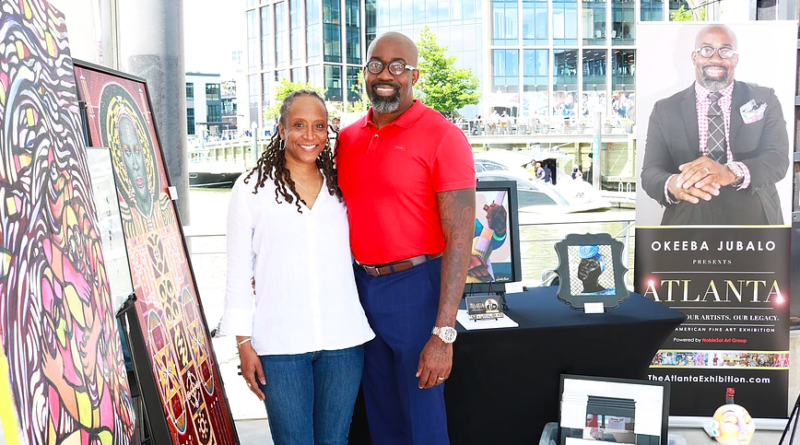 “Atlanta,” the masterful and meaningful traveling arts exhibition curated by Okeeba Jubalo is making its way to cities across the U.S. On the heels of a stop in Las Vegas, the show arrives in South Fulton on February 15 at the Aviation Community Cultural Center.

The show presents a rich tapestry of history, culture, current events and the human condition. It’s orchestrated by Jubalo to leave viewers enriched, enlightened and moved.

Each installation features a different group of multidisciplinary artists. Talent featured in shows preceding the South Fulton date have included Maurice Evans, Tokie Rome Taylor, Thom Bess, Grace Kisa and Steve Allen, who first rose to fame when he was commissioned to create a piece for the Centennial Olympic Games in 1996.

Jubalo, an artist and curator with over two decades of experience, likens the artist selection process to putting a band together.

The “Atlanta” exhibition is not just meaningful for viewers, but also for the artists who participate. The show features artists who have built a solid reputation for their work in the market, but Jubalo is also intentional about giving individuals on the rise a shot at the spotlight.

“A big part of it was looking at who needs to get to the next level,” said Jubalo. And according to the arts leader, the next level is not just about visibility, but also monetization.

In a market that largely influences trends all over the country, Jubalo wants local artists to set the trend and standard for how they are treated and compensated. He says that traditionally if artists are represented by a gallery, they only get 50 percent of the proceeds from their artwork. But Jubalo says this model is antiquated and unfair because most galleries aren’t investing in the artists’ process.

With the “Atlanta” exhibition, Jubalo is showcasing not only new work, but a new model of business in the arts industry by compensating artists more fairly, recruiting new collectors locally, and asking the community to not only support art by viewing exhibitions, but also by purchasing artwork. He says the market already has world class talent, but world class support is what’s needed to build a thriving arts community.

More details about the 2020 installation of “Atlanta” in South Fulton and how to support the show will emerge starting early December. More information about past shows and also sponsorship opportunities is available now at www.theatlantaexhibition.com.