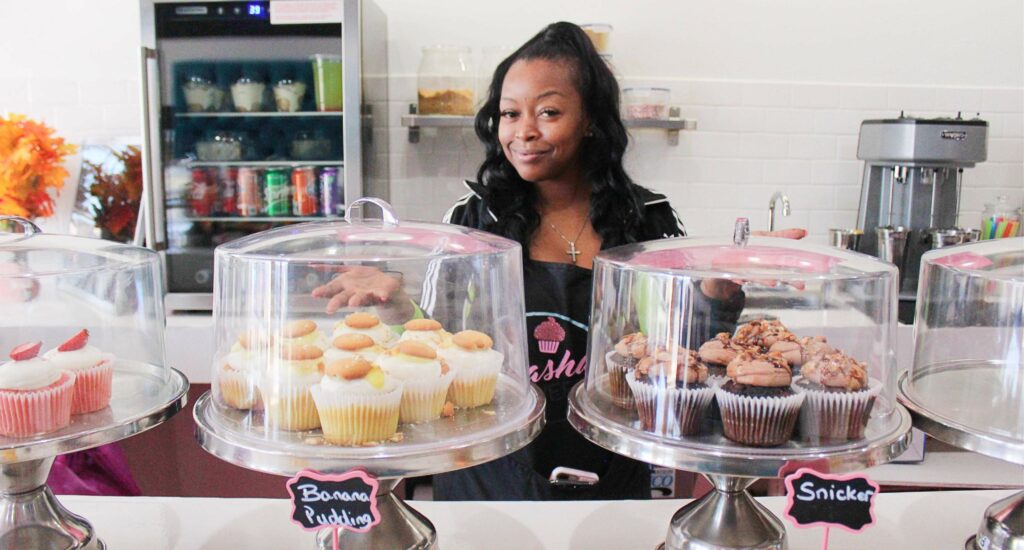 If there was a competition for the best cupcake in the metro area, Sasha Sweets Cupcake and Milkshake Bar in South Fulton would be a frontrunner. Open less than a year, the shop’s expansive menu promises to satisfy the craving of any sweet tooth.

Sasha Hill, the owner, has been baking nearly all of her life. She was just three years old when her grandmother began to enlist her help in the kitchen. Her first taste of entrepreneurship was in middle and high school when she decided to sell sweet treats to her classmates. And now, as a business owner, she’s enjoying being her own boss and creating her own legacy.

Sasha Sweets is located at 3435 Roosevelt Highway, just a few doors down from Wayfield Foods in the Red Oak Village plaza. Hill said that she saw a void, and decided to fill it. “There are not a lot of sweets shops in the area, I just wanted to give the community something different,” she said.

Business has been steady, and she does a lot of catering jobs too. Rapper and activist Killer Mike, neighboring businesses and the faith community have been some of her biggest supporters.

Topping the list of her biggest sellers are her red velvet, Snickers and strawberry cupcakes. But her banana pudding cups and peach cobbler are just as popular.  If Hill’s goal is to make sure that South Fulton families don’t have to travel outside the city for a self-indulgent confection, then she’s already wildly successful. Sasha Sweets’ over-the-top milkshakes piled high with donuts and cupcakes easily rival the Insta-worthy desserts found in trendy metro area spots like Atlanta’s Sugar Factory.

Right now, Hill is preparing for a bustling holiday season and positioning her business for more growth in 2020. In anticipation of Thanksgiving, she’s added personal-sized sweet potato pies to her shop. Plus she’s taking orders for cakes, whole pies, and pans of peach cobbler and banana pudding. She’ll be offering specials for Thanksgiving pre-orders until Saturday, and she’ll even be open on Thanksgiving for a few hours for order pickups and for those who’ve waited until the last minute.

Next up, she’ll be expanding her menu and looking for ways to give back. Just last week, she rolled out taco Tuesday which is already a hit with her patrons. Plus, the Banneker alumna hopes to support local schools in the near future by offering a free treat for honor roll students.

Small Business Saturday is November 30, 2019. Support South Fulton business owners this holiday season by remembering to #shopsmall. Have a business you want to tell the community about? Fill out our business profile form and we’ll share your story.