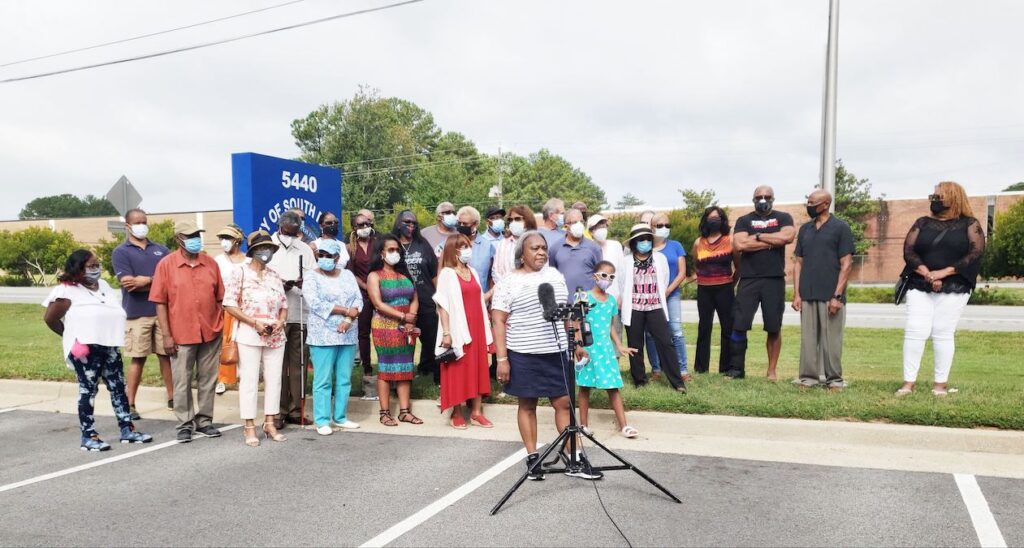 Controversy continues to swirl around HB 921 and HB 1019. The bills, sponsored by members of the South Fulton legislative delegation, make several changes to City of South Fulton’s charter.

A group of citizens, including ethics board member Jewel Johnson and former mayoral candidate Benny Crane, held a press conference on Friday to oppose the legislation.

“Our city has been hijacked by our state legislators,” said Johnson, who was a strong supporter of cityhood. “The citizens made this city. We wanted to chart our destination as to how we want to be. The citizens have been taken out of the picture.”

The city charter calls for a five-year review by committee. Johnson’s group is calling for legislators to wait until review takes place before making changes. They are also writing letters to Governor Brian Kemp.

It’s not the first time that questions about the legislators’ changes to the charter have been raised. The City Council previously asked for a meeting with the delegation to discuss them. In a special called meeting on March 2, the Council discussed recommended changes for HB 1019. That was followed by a special called emergency meeting on June 29 to authorize special counsel to advise them on both bills during an executive session.

HB 921 requires the city attorney to be a city employee. He or she would be prohibited from engaging in private practice or representing any other government entity, agency or board. The bill empowers the city attorney to serve as the head of the city’s legal department, and to hire assistant city attorneys as the Mayor and City Council deem appropriate.

The current city attorney is Emilia Walker, a South Fulton resident and partner at Fincher Denmark. Other attorneys at the firm provide additional support, including providing legal counsel during meetings of the Board of Ethics and Planning Commission.

The legislation was drafted on the heels of a hearing to remove Mayor William “Bill” Edwards and Councilmember Helen Z. Willis. According to Councilwoman Dr. Catherine Foster Rowell, while there has not been consensus on House Bill 921 among the City Council, they are in agreement on several changes they would like on HB 1019. Some of those changes include:

“At the end of the day, laws change,” said Councilwoman Rowell. “There are two ways you can change it. The delegation can be open to amending it in the future, or the City Council can amend it with a vote of five.”

Some citizens say they are in support of charter changes. And in response to others who say citizen input was not considered, they cite a citizen-led meeting held in January at the South Fulton Arts Center and attended by state legislators where parts of the legislation were discussed.

The South Fulton legislative delegation has announced that they’ll participate in another town hall meeting to discuss the bills. The virtual event will take place on August 4 at 6 p.m. via Zoom. Registration is required.