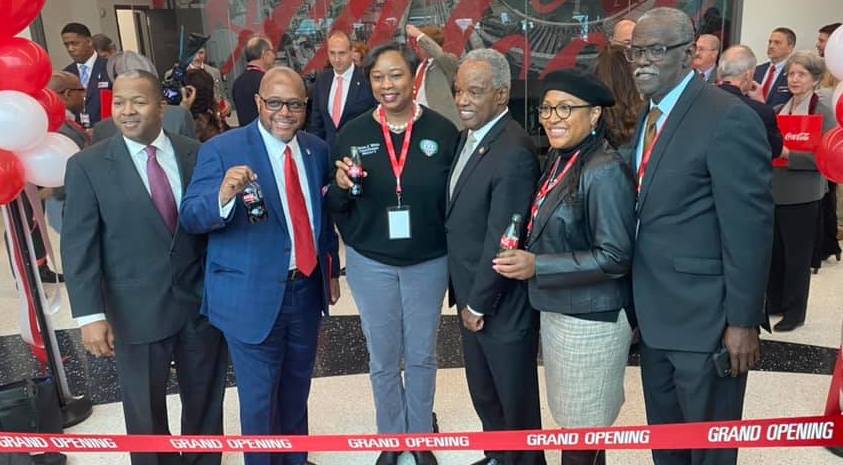 Coca-Cola Bottling Company celebrated the official grand opening of its new $86 million sales center at 4913 Mason Road in Union City on Friday.   The 456,000 square foot facility – which includes a sales and distribution center, warehouse, fleet shop, administrative offices and meeting space – represents one of the largest investments in a sales center in the U.S. Coca-Cola System.

The South Metro center will serve more than 10,000 customers throughout Atlanta with beverages from the expansive Coca-Cola portfolio.  The facility, which has been operating since the end of 2019, serves 15 counties in metro Atlanta.

Construction of the facility began in early 2018 and initially caused concern among some South Fulton and Union City residents. Nearby homes in the Creekside and Parkway Villages subdivisions sustained damage, including cracked foundations and floors. Families were inconvenienced by noise and compromised air quality. And others worried about the truck traffic that the facility would bring.

Representatives from Coca-Cola Bottling Company met with South Fulton officials and residents to address the outcry. Councilwoman Helen Willis lives near the facility and was one of the residents impacted. She said that the company has made good on its promises.

“They have done the things that they said they would do,” she said. “They have addressed the concerns of residents impacted via a third party insurance company, and they’ve committed to supporting community events, schools and other initiatives.”

Willis reported that the company has supported Seaborn Lee Elementary and Camp Creek Middle with beautification projects and career day participation. The company has also contributed financially to the City of South Fulton’s first business incubator which will open in the Old National area this quarter.

Willis shared that the company has committed to ensuring that trucks that enter the facility do not interrupt the quality of life of residents. Residents have recently reported damaged signage, curbs and landscaping due to truck traffic near their homes. GIS systems have been updated to hopefully divert traffic away from residential areas.

Willis also said that the company routinely make her aware of job fairs so that she can alert residents who might wish to compete for any open positions. The facility has 750 employees with a payroll of more than $41 million. The next hiring event will take place onsite on Feb. 8 from 9 a.m. to 1 p.m. Jobseekers are encouraged to complete an application online online prior to arrival.

“I appreciate all that they have done and their continued support,” she said. “I am hopeful that it will remain this way in the future.”