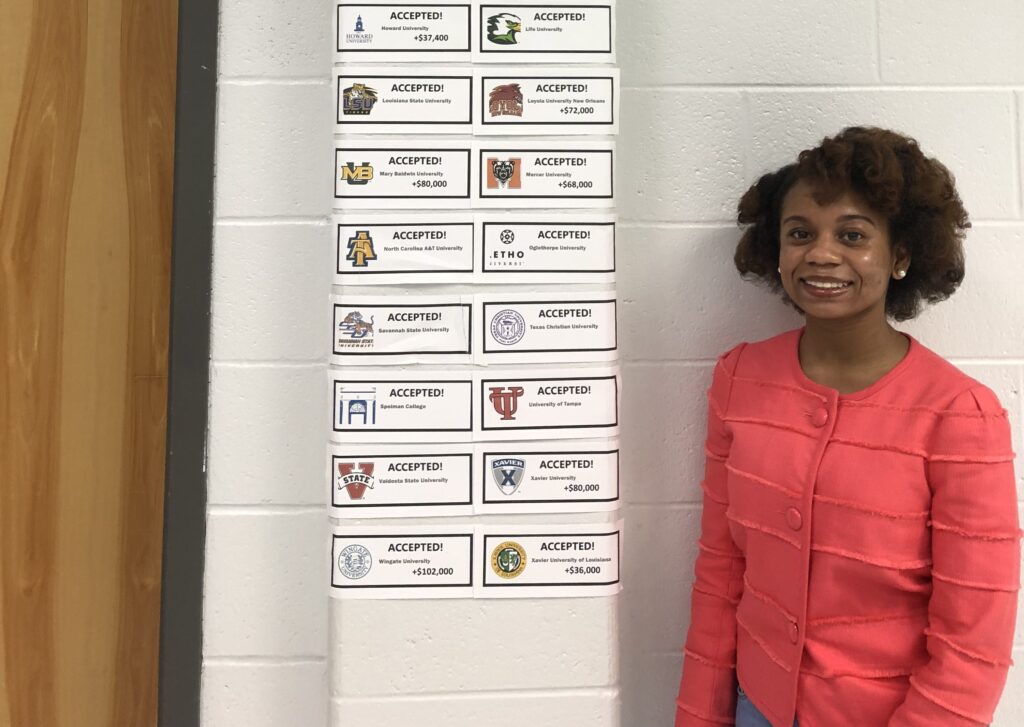 Westlake High School Senior Kayla Willis has been accepted to 31 colleges and been offered nearly $1 million in scholarships, a rare feat for any high school senior.

Schools near and far, such as Texas Christian University, Loyola University of New Orleans and Spelman College want her to be part of their incoming 2019-2020 freshmen class.

“Earlier this year I didn’t know where I was going to college,” Kayla said. “After I sat down and thought and prayed, everything came together. I was more proactive than ever. I did things the right way.”

Deciding what to do first, Kayla focused on her education.

“I taught myself time management,” she said. “I learned how to balance my part-time job with my schoolwork. If there’s a big project I make sure I have two weeks to complete it.”

One of her big projects became applying to colleges. While many apply to two or three, Kayla applied to 44.

“My goal was to have options,” she said. “I didn’t want to limit myself. I also asked the question, how can I go to school for free?”

After making the effort, she got scholarship offers from schools that she was doubtful about. She began to share her enthusiasm with members of the community service club she founded, Going Against the Grain, and other Westlake students. In total, she’s received $925,000 in potential scholarships.

“If you don’t think you can do it, I’m about to show you that you can,” Kayla said.   Some students are reluctant to apply to more than a few colleges because they are afraid of the cost.

After getting denied and deferred by some schools, Kayla used her rejection as motivation. “That’s just part of the process,” she said. “The more you apply, the more you try, the more acceptances you’ll have and the more motivated you’ll be.”

“A lot of times we assume every student knows they can be accepted into college if they apply, but they don’t,” he said. “When you see a story like Kayla’s and her quest for college scholarships, it lets you know how far our students can go. Kayla’s enthusiasm has encouraged our students. It’s contagious.”

After prompting from her father, Kayla posted her picture next to Westlake’s college acceptance wall on Twitter and in a few days received more than 136,000 likes. She’s now gone viral, and her tweet has received the attention of the news media.

“My younger brothers and sister are now saying, how does it feel to be famous?”

After receiving congratulations from all over the world from readers of her tweet, Kayla has decided where she’ll attend college.

“I’ll be attending Fisk University in Nashville on a full-ride scholarship,” she said.

Westlake’s wall of senior accomplishments and acceptances grew after Kayla’s story was published on social media.  She is humble.

“I’m here to encourage. If you are proactive and persevere, you can achieve any goal.”