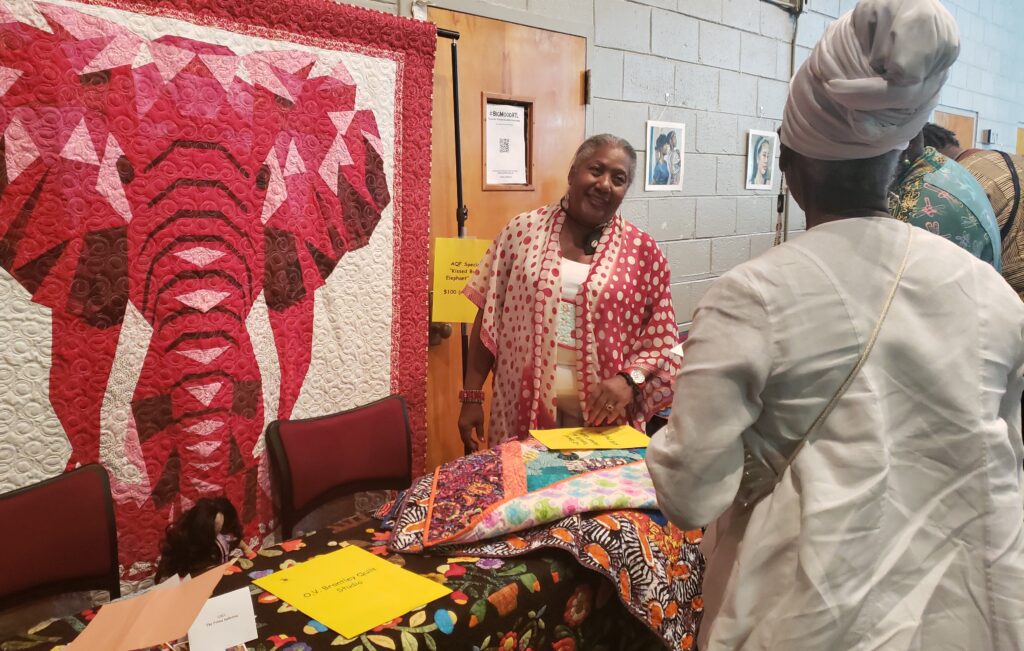 The Atlanta Quilt Festival, now in its 11th year, opened at the start of the month at the South Fulton Arts Center. More than 100 quilts are on display, highlighting the work of novices and hobbyists, professional artists and craftswomen who are preserving the legacy of past generations.

The opening reception on August 4 attracted attendees from all over the metro area to view traditional and art quilts of all sizes. They also had an opportunity to hear the personal stories, steeped in rich history, of some of the people who created them.

“Almost everybody I know loves quilts,” said O.V. Brantley, the South Fulton resident who founded the Atlanta Quilt Festival.  “If you say the word quilt, people will say ‘my grandmother used to quilt.’ It brings back fond memories for people.”

Brantley’s own grandmother, Clara Ford, lived and quilted in Crossett, Arkansas until her death in 1966. Nearly two decades ago, Brantley inherited eight of her grandmother’s antique quilts. Around the same time, she began quilting and has since made over 300 quilts. Her work is featured not only in the Atlanta Quilt Festival, but also in the homes of collectors and in the book “Georgia Quilts – Piecing Together a History.”

“I didn’t want the art of quilting to disappear,” she explained. She launched the Clara Ford Foundation in 2005 to preserve and promote African-American quilting. And her goal with the Atlanta Quilt Festival, which is sponsored by the foundation, is that it not only pays tribute to the past, but that it also helps to ensure that people will still continue the tradition of quilting well into the future.

The Atlanta Quilt Festival’s primary exhibit at the South Fulton Arts Center is open daily. Guided tours can be scheduled by contacting the festival coordinators.

The festival also features a variety of interactive activities and events throughout the month of August. A few of the much-anticipated highlights include: a collage ancestral journal class on August 17 at South Fulton Arts Center; a trunk show featuring the work of Marquetta Bell Johnson on August 24 at the Aviation Community Cultural Center; and a beginning quilting class on August 24 at Hammonds House Museum.

A full event calendar and details are available at www.atlantaquiltfestival.com.