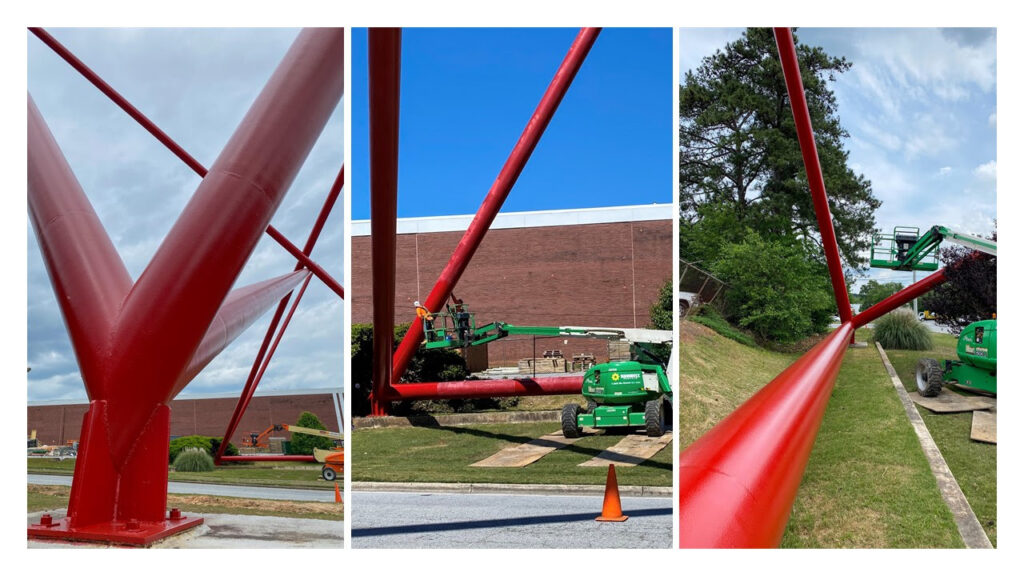 Despite the pandemic, the Fulton Industrial corridor has remained busy. Essential workers have labored to meet the demands of the food production, storage and logistics industries. And improvements and new developments, including an Amazon logistics facility, have been recently announced.

The Boulevard CID has continued to invest in beautification projects. Pine straw was recently installed around the I-20 and FIB Interchange, center islands north and south of the interchange, Great Southwest Pkwy. and Fulton Industrial’s center islands around Cascade Road.

Additionally, the Gateway sculpture was recently repainted. Designed by world-renowned American artist Peter Forakis, the road-spanning structure was built in 1967 and remains one of the largest examples of modern geometric sculpture in the world.

Two new developments are emerging along the corridor, including an Amazon facility and Better Up Foods.

The 100-acre logistics site, a former abandoned clay mine has an additional 56.5 of expansion land. The facility has 40-foot minimum clear heights, ESFR, 218 dock doors, four drive in doors, and 70-foot deep speed bays with 56-foot by 51-foot column spacing.

Batter Up Foods’ sister company, SatisPie, is also making the move to the corridor. Once fully operational, the improved 102,000 square-foot plant will have the ability to produce 580 million waffles a year.

The project is a $34 million investment and is expected to create 162 jobs.

“We are thrilled to establish this food processing facility in Fulton Industrial Park which will produce top of the line breakfast items for the world-class retailers we serve, while employing hundreds of workers in this area,” said Mike Pinkowski, CEO of Batter Up Foods.

The facility was previously used in food production and will be upgraded in phases beginning this year. Individuals who are interested in career opportunities with Batter Up Foods at the new location are encouraged to reach out to [email protected].

The Boulevard CID will meet virtually on June 24 to share more news about area happenings.