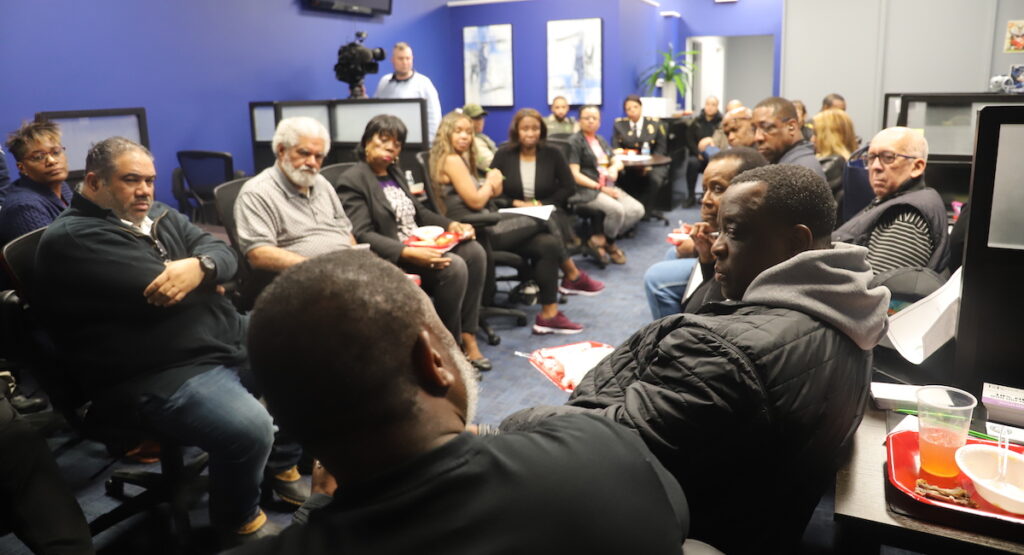 The Shops at Camp Creek Village on Butner Road is in the throes of parking woes. The congestion and related issues brought residents, business owners and the police together at the plaza’s mini-precinct for a meeting held by Councilwoman Carmalitha Gumbs.

“I’ve been talking to our business owners, residents and patrons about a number of issues that have been raised,” said Councilwoman Gumbs. “I thought it would be more effective if we could all get into one room to not only hear from each other, but brainstorm together the best solutions for moving forward so that everyone’s issues are resolved.”

The Shops, located less than half a mile off of Camp Creek Parkway, offers a glimpse into South Fulton’s unique makeup. On one side of the street is a quiet horse farm with rolling hills and grass as far as the eye can see. On the other, particularly on weekends, nightlife patrons from across the metro area fill not only the plaza parking lot, but also the adjacent residential streets.

Partygoers have multiple destinations to choose from within the plaza, including the popular jazz spot St. James Live!, Cigaros of Georgia, Infinity Lounge and Bella, a cozy eatery. The challenge, noted by Mayor Bill Edwards, is that the shopping plaza was originally designed for retail, a steady stream of customers going in and out. But the market crashed, and the years that followed saw a high turnover in tenants. The property began to attract nightlife venues, and they have done well.

The problem is that the parking configuration simply does not accommodate hundreds of people lingering for hours at a time enjoying food and live entertainment. And while nearby residents admit that they enjoy the entertainment options that The Shops has to offer, it’s creating more headaches than they bargained for.

“It’s too much,” said one resident in attendance at Councilwoman Gumbs’ meeting. She and her neighbors are fed up with cars lining their streets and partygoers loitering outside of their homes. They say the aggravation continues well into the next day when they are often forced to pick up the trash that the plaza’s patrons have left behind.

Among some of the most well-received options were parking attendants, valet parking and added security. The parking congestion has made the hotspot a target for thieves seeking quick smash and grab opportunities.

Jon Antoine, public safety director for Aerotropolis Atlanta CIDs, was in attendance and was open to increased partnership with the City of South Fulton to increase their patrols of the area. Mayor Edwards suggested collaborating with the landowner to convert existing adjacent land into a parking lot. Police Chief Meadows and Captain H. Cotton-Tukes said that they could accommodate residents’ requests to provide additional police cars onsite during major events and when large crowds are anticipated.

It was a timely suggestion as crowds are expected this weekend as patrons flock the Butner Road plaza for “fight night” on Saturday. In the past, area residents of the adjacent townhome community have had patrons’ cars booted when crowds have encroached on their ability to park in their neighborhood.

Andre Elam was one of the patrons impacted earlier this month. He parked in what he thought was an available parking spot only to return to a boot on his car and a $75 bill. He said that signage was confusing and recommended a “residents only” sign for areas that are off limits to The Shops’ customers.

While the parking congestion at The Shops at Camp Creek Village is not an issue that will be resolved overnight, city officials, business owners and residents are committed to working together to figure it out.

“Our city is growing and we want to ensure that we’re creating an environment that is welcoming to businesses and patrons, but also where residents can enjoy amenities without the burden of excessive inconveniences,” said Councilwoman Gumbs.

“Admittedly, we have a lot of work to do,” she continued. “But the good news is that we have a group of committed stakeholders who have rolled up their sleeves and are getting to work. I’m confident that we will come up with an arrangement that ensures the profitability of our businesses, the safety and security of the patrons, and optimal quality of life of for our citizens.”