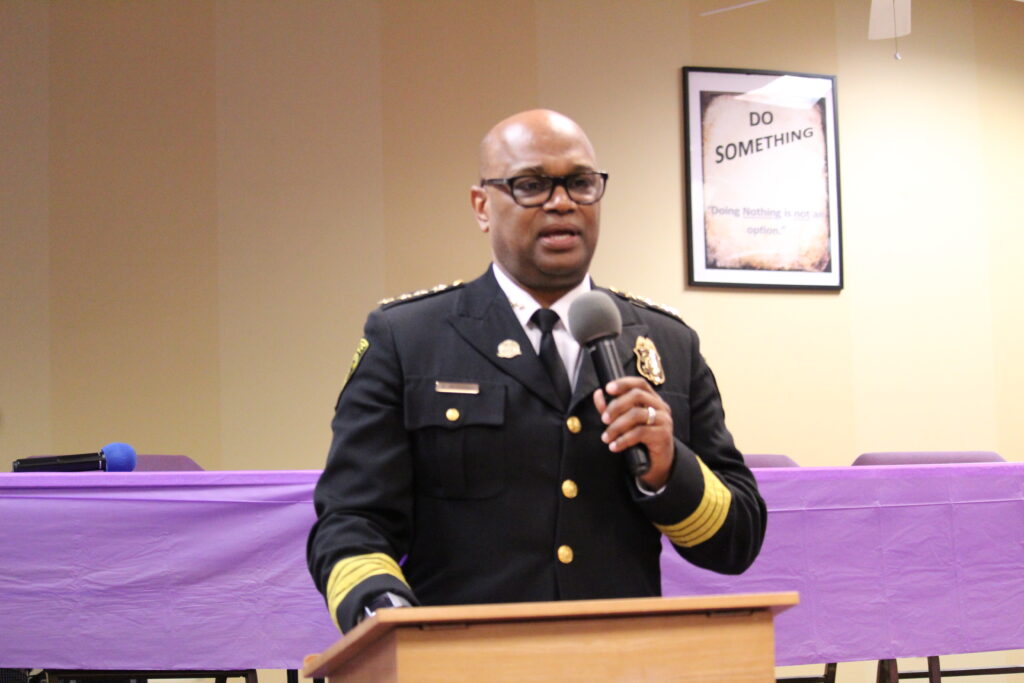 When the newly formed city of South Fulton prepared to transition the police department over from Fulton County, officials thought that most officers would make the move. But a decision by the county to maintain a small department to patrol the Fulton Industrial corridor left the new city with a fractured force and several resource gaps.

But just over a year later, the department has nearly been made whole. Under the leadership of Police Chief Keith Meadows, the department has expanded and is being restructured to tackle the challenges of today, and anticipate the city’s future needs.

At a recent townhall meeting hosted by Mayor Pro Tem Mark Baker, Chief Meadows touted a number of developments in his department, including 49 percent growth in personnel. The growth of the department has included the formation of a park rangers unit and the expansion of the city’s gang unit. The unit’s head, Sergeant Tealer, was recently recognized by the State of Georgia as the “Gang Investigator of the Year.” His investigations have impacted more than 28 jurisdictions.

The police department continues to recruit new officers. Starting October 1, by a vote of the city council, a pay increase will go into effect to help the city compete for talent with neighboring municipalities. Georgia POST certified officers will be classified as Police Officer II in South Fulton and start at $52,007. Officers without the certification will start at $44,926.

While the department is growing, the crime rate is on the decline. Chief Meadows reported a 12 percent decrease overall.  The department is leveraging strategic partnerships to target and bring down key players.

Most recently, the department partnered with the FBI and ATF for a six-month long investigation that targeted residences and businesses suspected to be dens of illicit activity. The effort led to multiple arrests and the seizure of weapons, drugs and U.S. currency.

“We believe that it’s not only going to have a dramatic impact on our violent crime rate, but also the drug market in the southern portion of the city,” said Police Chief Keith Meadows. “We’ve put all of the businesses on Old National on notice.”

The department has plans for a new police headquarters at  Tri County Station at Old National Hwy. and Hwy. 138, one of the city’s most problematic plazas for crime. The department has also expanded its web presence on the city’s website to empower citizens. Anyone can now request traffic enforcement, file a police report, request extra patrols and more all at the touch of a button.

Despite his department’s milestones and successes, Chief Meadows recognizes that much of this may mean very little to South Fulton residents who have been the victim of a crime. “We’re nowhere where we want to be in terms of our crime reduction,” he said, citing the sheer magnitude of the Atlanta metropolitan area’s gang problem as one of the biggest challenges.

According to Chief Meadows, metro area police departments are tracking over 200 gangs in the region. South Fulton police are working together with multiple agencies to tackle this and related issues collectively. Results won’t be overnight.

“The best way for us to deal with this is to eat that elephant one bite at a time, and that’s what we’re committed to doing,” said Meadows.

And the community will have to play an active role as well. The South Fulton Police Department continues its efforts to build strong relationships with residents as part of its commitment to 21st century policing best practices. This week, the department will host National Night Out, a community-building campaign that promotes police-community partnerships and neighborhood camaraderie.

“Law enforcement and residents working together is what helps to ensure our communities are safe places to live, work and play,” said Meadows.