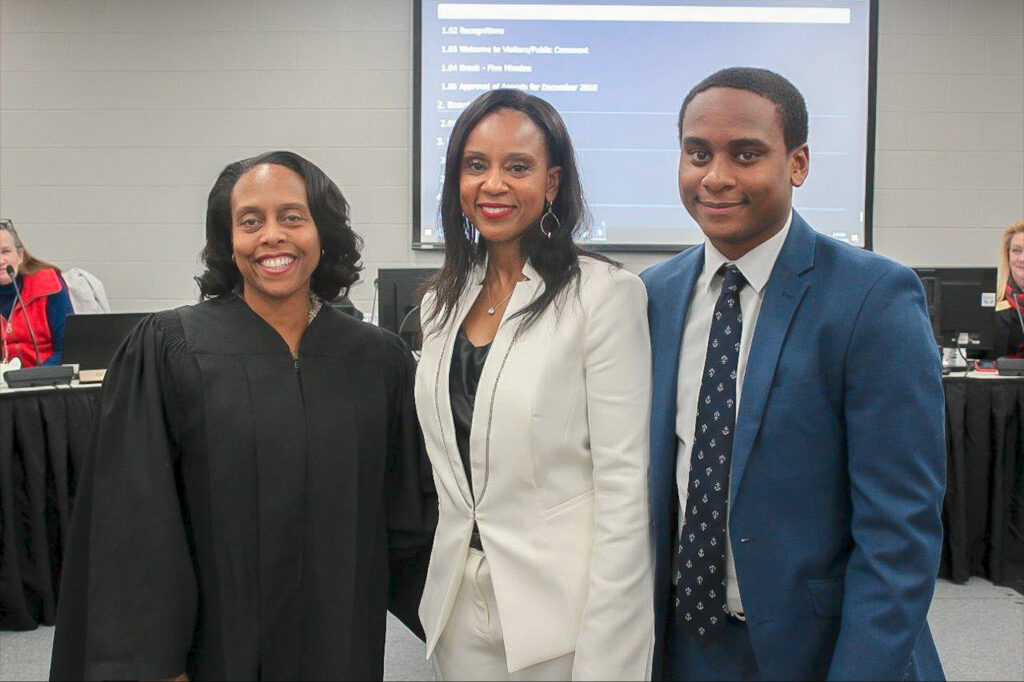 At Thursday’s Board Meeting, Fulton County Board of Education member Kimberly Dove was sworn in to a four-year term of office which will begin in January. She represents District 6 which is comprised of parts of College Park, East Point, South Fulton and Union City.
Dove was previously appointed in August 2017 to fill the unexpired term of former board member Catherine Maddox, who resigned due to health concerns. She later qualified as a candidate for the seat and won the election in May 2018.
Dove has held various leadership roles as a school volunteer and as the president, vice president and parliamentarian of the Parent Teacher Student Association (PTSA) at Westlake High School. She also has served as co-chair for Westlake’s School Governance Council and is a past recipient of the high school’s Volunteer of the Year Award. Additionally, she has been a member of the Superintendent’s Parent Advisory Council and has held roles as PTA member and volunteer at Renaissance Elementary School, Camp Creek Middle School and Sandtown Middle School.
Dove’s professional experience includes 15 years as an information technology expert with knowledge in leading, coaching and developing teams within the IT industry. She specializes in mergers and acquisitions with systems integrations and network infrastructure. She also has a concentration in analyzing corporate applications across multiple business units.
In addition to Dove’s professional experience and service to her community, she and her children are graduates of the public-school system. She is a proud parent of three children, one of whom is a graduate of Fulton County Schools.
Dove’s overflow of service also spills into the community with her previous commitments as board member of Protecting Our Schools and Community and as a member of the education committee for The People’s Campaign. She is a long-time resident of South Fulton and currently resides in the City of South Fulton.
PHOTO: The Honorable Cassandra Kirk, chief judge of the Fulton County Magistrate Court, presided over the swearing-in of Board Member Kimberly Dove (center). They are shown here with Ms. Dove’s son, James, who arrived in support of Ms. Dove’s first full term. (Credit: Fulton County Schools)
For more South Fulton news and updates, follow us on Twitter (CoSF Observer) and Facebook at www.facebook.com/cosfobserver.