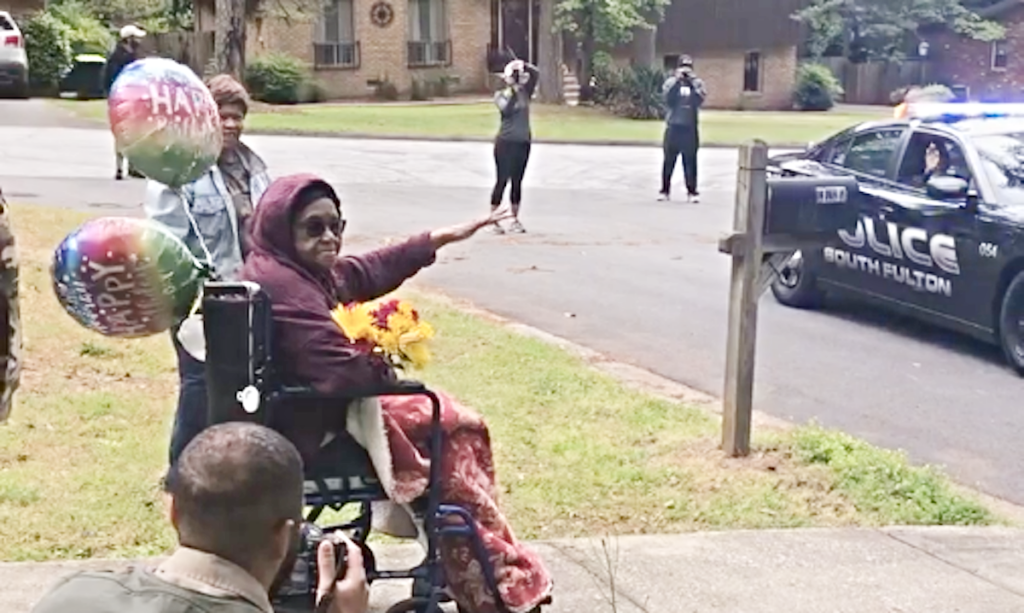 Young, who has lived within a radius of only several miles for her entire life, turned 100 years old on April 12 amidst the trials of the COVID-19 virus. Officials honored her with a sirens-blazing parade past her home on Montilly Place. She was even serenaded over the loud speaker.

“It’s not every day you turn 100,” Mayor William “Bill” Edwards said. “She has spent her entire life here and contributed significantly to the quality of life through her service to her community.”

As president of the Old National Garden Club, a position she held for more than 25 years, Young worked with Edwards to foster communication and connection between residents and the merchants along Old national Highway. Her daughter, Paula Young, remembers her mother’s tireless work to persuade Kroger to relocate to the area.

“She wanted to have a nice store in her community,” Paula Young remembers. “She and the mayor kept at it until Kroger moved to Old National.”

Nowadays, Young – a mother of two with four grandchildren – enjoys what her daughter calls a “leisurely life” filled with music, her favorite television shows and regular trips to that Kroger store.

“She’s still active. She loves to go grocery shopping,” Paula Young said. “Everyone there knows her. It’s like family.”

Young’s daughters call her a model mother. Honesty, morals and strong values are all gifts that she passed onto her children, along with her late husband, Paul Young.

The two served faithfully at Wheat Street Baptist Church in Atlanta’s Sweet Auburn neighborhood. She led the mother’s board for a quarter century and he served on the board of deacons.

Ms. Young’s love for young people stretched beyond her own children to students at Morris Brown College, where she worked for several years as a dorm mother. She also followed a wandering spirit to different destinations around the globe, with journeys to Israel and Canada and several trips to Hawaii.

Every time, she returned to Fulton County never persuaded to permanently leave the place she felt was home.

“She’s led a very good life,” Paula Young says. “She’s my mom and my best friend. She was always there for her family and instilled moral values in us. She’s just the best.”