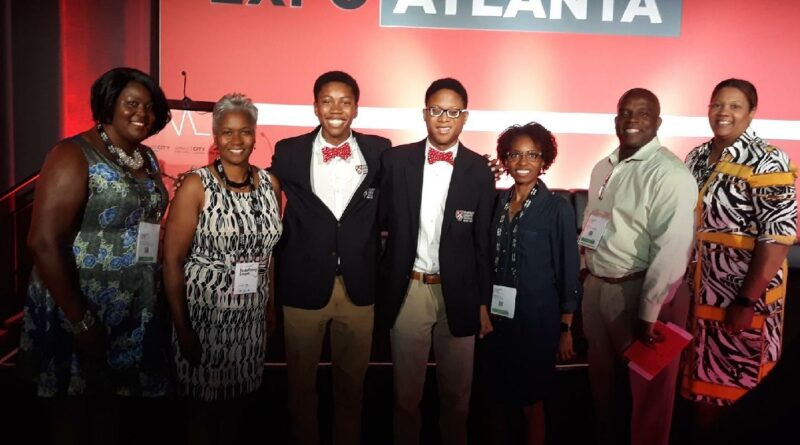 Smart City Expo Atlanta is in full swing this week at the Georgia World Congress Center. The event is the U.S. edition of the world’s leading conference on smart cities and smart urban solutions held annually in Barcelona. The theme this year is “Redefining Smart,” with a focus on equity, prosperity, humanity, inclusion and justice.

On the agenda were a number of presentation and panels on the topics of “The Future of Sustainable Business,” “Smart Cities Are Communities Where Boys and Young Men of Color Can Thrive,” “The Future of Work in America” and more. City of South Fulton elected officials and department heads were among local leaders that gathered to get a glimpse into how blockchain technology, artificial intelligence and the Internet of Things can help cities advance.

Police Chief Keith Meadows was one of the attendees of the “Public Safety in the Age of Intelligence” talk, while Councilwoman Catherine Foster Rowell gathered research on how autonomous vehicles might help enhance the city’s business landscape.

Remarkably, two South Fulton students not only attended the conference, but got to help cast a vision for the future of smart cities. Westlake High School’s Keith Harris and Banneker High School’s Xavier Shankle were two of the panelists that addressed “Changing of the Guard: Millennial Voices Making Cities Smart.”

For Shankle, he’s interested in greater local investment in tech infrastructure and would like to see more bikes and scooter stations and digital maps. He also sees the value in preserving green spaces.

“The future belongs to those who prepare for it today,” he said. “Considering we want to own our future, it is necessary that future world changers can have their voice heard when it comes to the development of a smart city.”

Harris echoed Shankle’s point, saying that the future hinges on getting more input from young people, and giving them more opportunities to not just have their voices heard, but also to lead. And for him, that starts with opportunities in schools.

“One thing I would love to see in Fulton County Schools is more opportunities for young people to lead,” he said. “They can’t become leaders without chances.”

Hopefully, school leadership will take note but in the meantime, the students have the attention of city leaders. Melanie Winfield, South Fulton’s assistant city manager was one of the department heads to hear the young men speak at Smart City Expo Atlanta.

“We were especially proud to see high-schoolers, Xavier Shankle and Keith Harris speaking at the event about their experience with the Harvard Debate Council Diversity Project and the need to include youth in smart city plans,” she said.

According to Winfield, the city of South Fulton, even in its infancy, has already begun implementing some smart city solutions, and is considering several others.

“We’ve recently made SeeClickFix, a mobile app and web tool, available for residents to engage with city personnel by reporting issues and problems in real-time,” said Winfield. “With the tool, residents can specify the location and attach a photo to show the actual problem.”

“Our public safety efforts also include smart city solutions such as body cameras worn by police officers and license plate readers to capture speeding drivers,” she continued. “In addition, residents can report non-emergency incidents via the PolicetoCitizen tool that was recently launched.”

As the city moves forward to incorporate other smart city solutions to engage and serve residents effectively and efficiently, the options are endless. And Shankle and Harris have Winfield’s assurances that stakeholders of all ages are being considered, and that the city is making inclusion a priority.

“In implementing smart solutions, we must approach the process from the vantage point of the end-user to assure that the solution is customer-focused and inclusive of everyone,” she said.