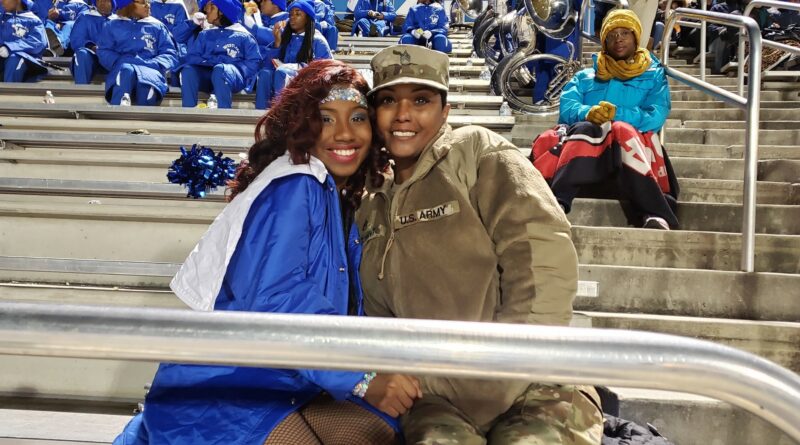 All Soldiers make incredible sacrifices for their country and their families. But when a mom serving in the military is separated from her child, it tugs at the heart strings just a little more.

So, when U.S. Army Staff Sgt. Whisonant returned from a deployment to surprise her daughter Greylynne Coleman at Westlake High School on senior night this past Friday, everyone who witnessed the moment could feel how special it was.

And it wasn’t the first time that Staff Sgt. Whisonant had done it. Over the course of her 19-year career in the U.S. Army Reserves, she’s often had to leave home. But she’s always made it a priority to share her daughter’s milestones. Whether it was her sixth birthday party or her prom, she’s shown up.

“I’m fortunate that God has moved heaven and earth for me more than once to be there when my daughter really needs me,” she said. “I feel blessed that I’ve always been able to be there.”

Juggling parenthood and military service can be tough. In fact, when Staff Sgt. Whisonant first announced to her family that she wanted to serve in the military, her grandparents weren’t thrilled. They knew firsthand the sacrifices that would be required, and that a Soldier’s life isn’t an easy one.

Staff Sgt. Whisonant is a third-generation Solider with deep ties to the military. Not only have her father and grandfathers served – along with a host of aunts, uncles and cousins – but her grandmother worked at Fort MacPherson for over 40 years, where she was a rock for many of the Soldiers there. When Staff Sgt. Whisonant was assigned to Fort MacPherson, she had the opportunity to serve alongside Soldiers who’d seen her grow up in pictures on her grandmother’s desk.

Her journey from youth until now has been filled with accomplishments. Like her daughter, Staff Sgt. Whisonant was a magnet program student at Westlake High School. She graduated from Spelman College in 1998 with a B.A. in psychology and earned her M.S. in professional counseling from Georgia State University in 2006. It was the death of her mother in 2005 and her daughter that inspired her to finish her education while serving full-time as a police officer.

The majority of her military career has been spent training Soldiers. She’s an Army certified instructor, master resilience trainer and was a marksmanship instructor for eight years. If there’s a Soldier that needs to be trained, she’s committed to making sure they are successful.

“My God-given mission is to be a teacher and a healer,” she said, citing the many instructors and trainers she’s had along the way who have helped and inspired her.

When asked if she’s inspired her daughter to serve, she says that Greylynne has expressed some interest, but she can now relate to how her grandparents felt when she made the decision to serve.

“The sacrifices are a lot and I made the sacrifices so that she didn’t have to,” said Staff Sgt. Whisonant. “But should she choose to serve, I would support her 100 percent.”

For now, they are focused on applying for college and staying present. They are taking it one day at a time, loving each other one minute at a time.

Staff Sgt. Whisonant says that a lot of the stress of being deployed isn’t combat related, but actually due to not being able to be home or be with family. So making each moment special and creating normalcy is important. For other moms who are serving, she says, “It’s going to be okay.”

“There are long training days, long workdays, times when you have to leave,” she said. “But you have to trust that everything is going to work out for your good and your family’s good. Put one foot in front of the other and, when you have to, take a knee and just breathe.”

Staff Sgt. Whisonant returns to her assignment today. We ask that the entire South Fulton community join The Observer in wishing her well and sending prayers for her safe return.