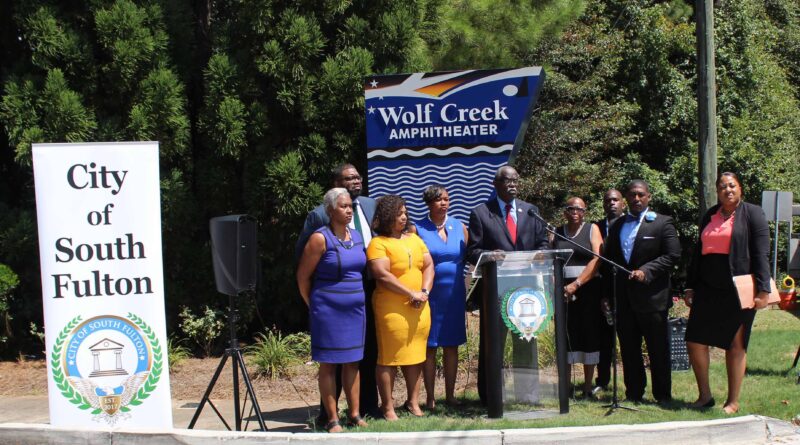 South Fulton’s transition from Fulton County has been anything but smooth. Over the two-year process, residents have watched city and county leadership haggle over assets and their costs.

In May, Mayor William “Bill” Edwards announced the city’s intention to acquire the Wolf Creek Amphitheater in a formal “State of the City” address. But now, just three months later, negotiations with the county have turned sour and the city is taking legal action.

Today, just outside of the amphitheater, Mayor Edwards and six members of the city council announced that the city has filed a lawsuit in Fulton Superior Court against the county to acquire the venue along with the Tom Lowe Shooting Range and the Southwest Arts Center.

The city has already acquired all parks within its boundaries at the cost of $100 per acre, and aims to acquire the amphitheater and shooting range as part of its park network. The city has also acquired the title to the South Fulton Arts Center where Fulton County offers services through a sublease.

In the lawsuit, the city also seeks to have the titles of two Fulton County libraries transferred over, both the South Fulton and Wolf Creek branches. According to South Fulton’s attorney, Emilia Walker, it is not the city’s intention to discontinue services at the libraries or charge the county related to services provided at the libraries. They would continue to operate as they do today.

“South Fulton citizens have a constitutional right to have local control over these assets and the city will fight to ensure that those rights are enforced and protected,” said Mayor Edwards during today’s press conference.

He said that citizens deserve the benefits of facilities that they’ve already paid for, and he vowed that the city will continue to work with the county as the lawsuit moves forward.

Some South Fulton residents who have been frustrated with the transition process say that they are in support of the city’s decision to pursue litigation.

“Our representation from the county has yet to explain to us why they feel they are entitled to manage the most valuable assets in our city,” said Deyanna Respress, a South Fulton resident who lives in the district where the Wolf Creek Amphitheater is located. “It feels like the county is retaliating against us for deciding we did not want them making decisions over our special services district funds anymore.”

Offering a different point of view, resident Jewel Johnson doesn’t support the city’s efforts to acquire the titles to the libraries. She thinks they should remain under the jurisdiction of the county. However, when it comes to the other assets in question, she does feel that the residents are owed proof of how their dollars have been spent.

“The county claims that the Wolf Creek Amphitheater was paid for out of general fund dollars,” she said. “Prove it. You have to show us where it says that everybody in the county has paid for it.”

In a statement issued earlier today, the county’s attorney, Patrise Perkins-Hooker said that the county has attempted to negotiate with the city and that while the amphitheater was once on the table, they’ve now reached an impasse.

“Fulton County has treated the City of South Fulton as a partner from the very beginning,” said Perkins-Hooker. “We have undergone an extensive negotiation process, including numerous offers and compromises, both including and excluding the Amphitheater.”

“The City of South Fulton has not accepted any of the offers made by Fulton County,” she continued. “At this point, we have exhausted all practical solutions and must now allow the judicial process to run its course.”

A significant number of South Fulton residents live in Fulton County’s District 6. They were previously represented by Commissioner Emma Darnell. However, due to her untimely passing, the seat is now vacant.

With an election on September 17 to fill the seat, the failed negotiations between the county and the city are likely to be a topic of debate. How candidates respond to the news of the city’s lawsuit may influence how South Fulton voters make their decisions at the polls.

“We continue to pay real dollars and only get pennies back into our community,” said Respress. “This is why these local elections are important. We need to be sure that our District 5 and 6 commissioners live in our community and support our right to self-determination.”