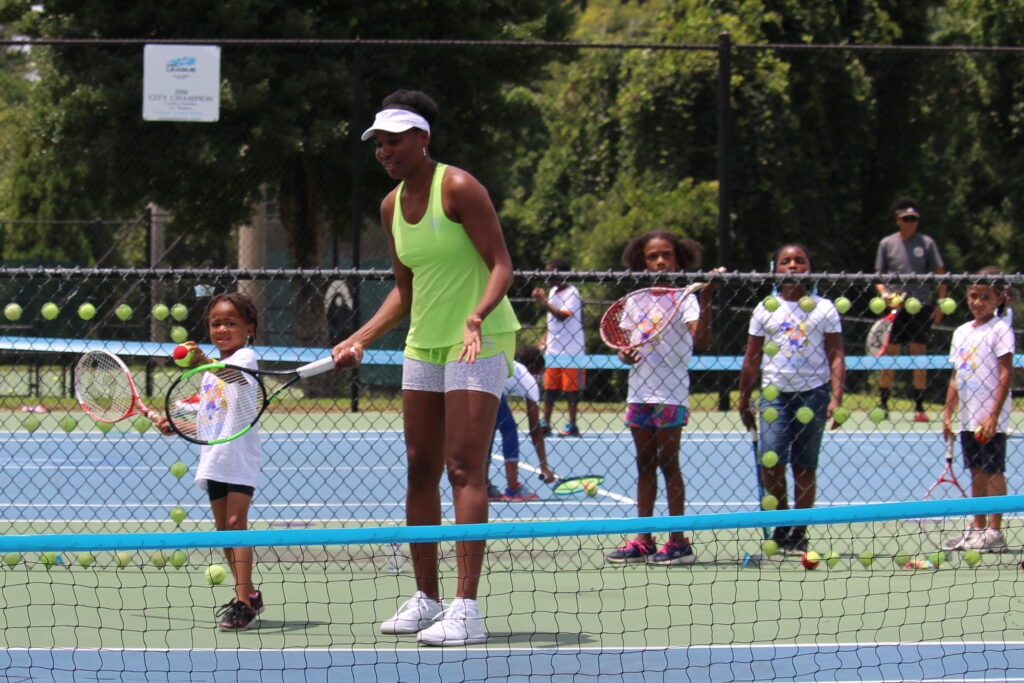 Fresh off a win at the 2019 BB&T Atlanta Open women’s exhibition, Venus Williams stopped by the South Fulton Tennis Center to encourage young players. The visit was part of USTA’s Net Generation Campaign which aims to inspire and help build a new generation of tennis greats.

Williams took time to hit a few balls, give high fives and offer pointers and words of encouragement to approximately 100 kids enrolled in the center’s tennis camp.

“More than anything I enjoyed spending time with the kids here,” said Williams. “I would love to come back, I’d like this not to be the last time.”

Sam Kennedy, executive director of South Atlanta Community Tennis Association (SACTA), oversees programs at the tennis center through a contract with the city of South Fulton. He said that Williams is one of the sport’s most “genuine and giving players” and that the experience was impactful for the young camp-goers.

“They’ve seen her on television, but to witness her out here, and to play with her, it will have a lasting impact on them,” said Kennedy. “And it’s going to propel the tennis center to the next level.”

After leaving the courts, Williams was presented with a proclamation from the city of South Fulton. Councilwoman Helen Willis presented the plaque, joined by Mayor William “Bill” Edwards, Councilwoman Carmalitha Gumbs, Parks and Recreation Director Tony Phillips, City Manager Odie Donald and others.

“I am honored that Ms. Williams found our youth worthy of her time to encourage them to excel in the game of tennis,” said Willis. “I am sure her visit will have a lifetime impression on our youth and inspire them to master tennis as she has throughout her long career.”

The South Fulton Tennis Center is located at 5645 Mason Road. It’s open daily, features 20 hard courts and four clay courts and offers programs for players of all ages and levels.