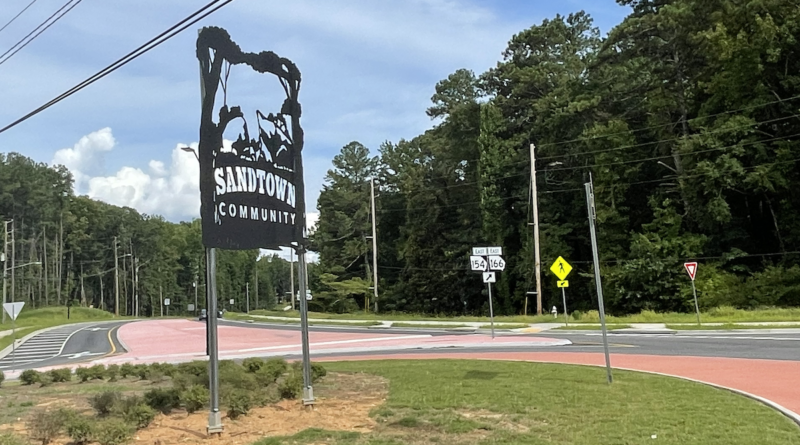 After a series of community brainstorming meetings and coordination with the Georgia Department of Transportation (GDOT), South Fulton’s first creative placemaking project has been installed. The four-panel monument in the roundabout at the intersection of Campbellton, Boat Rock and New Hope showcases the diverse natural surroundings of the Sandtown community.

The project, which began in 2018, was spearheaded by District 1 Councilwoman Catherine Foster Rowell. She tapped local artist Allen Peterson to produce the artwork. Over a period of several months, Peterson and his design partner, Julia Hill, toured the Sandtown community and took photos for inspiration, and collaborated with residents on imagery and design during multiple meetings.

“We wanted to cast a wide net to get as much feedback as possible,” said Rowell at a 2019 town hall meeting at Wolf Creek Library. “We’re trying to set a standard. We want public art in our city, and this is a great first step.”

What initially began as a single panel concept soon evolved into a multi-panel creative placemaking project based on resident input. The metal sculpture series reflects residents’ desires to highlight the natural beauty of the Sandtown area.

“We have an abundance of wildlife in the area as well as lakes and streams,” said Debbie Davis, a member of the Sandtown Community Association who helped develop the vision for the roundabout artwork. “We wanted to depict the diversity and beauty of our natural environment.”

The importance of creative placemaking was championed widely in 2009 by the National Endowment of the Arts. It goes beyond large-scale pieces that simply bear the name of a community. The concept is leveraged globally to help communities create a sense of place, purpose and identify. It’s also a strategy used to increase public engagement, drive economic development, rejuvenate public places, and build connections among residents through collaborative visualization.

The multi-panel Sandtown sculpture is painted black and mounted on breakaway posts in the central island of the roundabout. Each of the panels has been cut from 0.125-inch thick aluminum sheets. The project adheres to GDOT safety standards and can be easily repaired or replaced in the event of vandalism or a traffic accident.

“Safety was a big part of our effort,” Davis said. “The artwork does not block views and the materials are lightweight and flexible to help prevent injuries.”

The overall cost of the project was $12,000, which was secured by Rowell and the city’s Public Works Department.

“Our roundabouts provide a perfect stage for displaying the talents of local artists as well as telling the story of the surrounding communities,” Rowell said. “As gateways to the city, these intersections welcome people to South Fulton, so we are using them to introduce visitors to the diverse culture we enjoy.”

Additional public art projects are planned for South Fulton. The city’s Public Art Commission is in the process of producing a Public Art Master Plan and exploring funding options. A community survey is available to collect resident feedback on the types of projects they’d like to see in their area in the future.

Photo: A new creative placemaking project in the roundabout at Campbellton, New Hope and Boat Rock showcases the natural beauty and resident camaraderie in the Sandtown community. (Credit: Observer Staff)